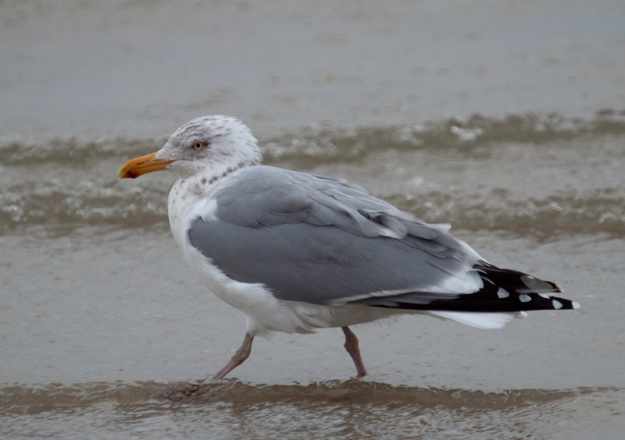 I was out on the kayak over the weekend.  Yes, I know it’s mid-November, but you have to remember that when I kayak in mid-November I have the waterway to myself.  On Sunday I took the Herring River in Harwich from the West Reservoir to Nantucket Sound and back, about a 10 mile round trip.  When I was out between the seawalls or jetties I saw something that is pretty common in this part of the world.  What I saw was a seagull dropping something onto the rocks of the jetty.

Being an in-lander from Ohio I didn’t have a huge amount of experience with the ocean growing up.  Sure I made some trips to the east and west coasts as well as Florida.  I also grew up in very close proximity to a great lake, Lake Erie.  Even with this I did not have the feel for the ocean one gets from spending huge amounts of time there.

One of my first real tastes of living by the Ocean was a four day weekend on Nantucket when I was first dating my wife.  One day we were sitting on the rocks by Jetties Beach.  There was a sudden ‘crack!’ as a hard object hit a few feet away.  Was somebody throwing rocks at us?  A gull came down, brave as can be, and picked up a clam sitting in the rocks next to us.  It lifted it up about 15 feet and dropped it, again just a few feet away.  The gull came back down, gave us a dirty look and did the same thing again, this time flying a few feet higher before dropping it.

We got the hint and moved.  As we were leaving I noticed quite a few broken clam and crab shells on and around the rocks in that area.

Nantucket is pretty much just a sand dune 30 miles out to sea.  OK, technically it’s glacial terminal moraine.  No matter.  What’s important to remember is there are few large rocks on Nantucket for a bird to use as impromptu mortar to crush their food.  So this gull somehow figured out that it could use the manmade seawall to get the job done.

How does a seagull figure it out?  How does it know that the jetty is the perfect place to have shellfish?  You don’t see hundreds of them dropping things on the rocks all day so either only a few in any given area have figured it out or they only use it when they are desperate and can’t find any softer food.

Birds can be very clever.  We usually don’t give them credit for their ingenuity, but there are several species of bird that make and use tools.  In fact, some birds create tools that are more sophisticated than those made by chimps.  Obviously these gulls didn’t make the rock walls but in some way you can say they are using a simple tool.  Wikipedia states that gulls have exhibited tool use behavior including dropping bread on the water to attract and catch fish.  It also says young gulls discover how to drop shells onto rocks by watching older gulls do it.  In other words, it’s a learned behavior.

We humans seem to think we are the only species that can think, innovate, teach and learn.  The more we look with an open mind the more amazing behavior we see from the animal world.  Anybody who is very close to a dog knows that animals in general can be intelligent.  Gulls in particular have pretty low marks with most humans.  We typically think of them scavenging off trash heaps, stealing French fries and just being nasty in general.  We forget how sophisticated they really are.  How beautiful they are in flight.  How clever they are.

It is sometimes useful to look at things from a different perspective.  We need to be humble and not just assume we are the end-all and be-all of creation.  The wide world is a wonderful place which, as the word implies, is full of wonders. Over billions of years nature created a system that works beautifully.  That is one reason I like to kayak.  It gives me a different perspective of the land and water around me.  It helps free my mind from the homo-centric world we live in.  It helps me to reconnect to something larger than myself.

Now all I have to do is find a large rock to drop all of my problems on.