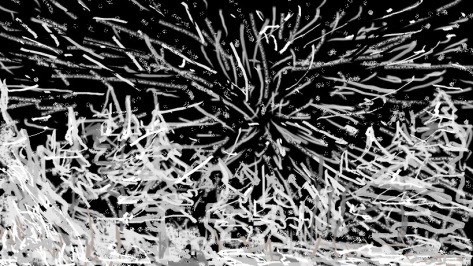 “I’ve seen worse.”  John was looking through the swirling snow at the small cliff.  This was the one chokepoint on the relatively easy climb.  There was a path up that involved only a minimal amount of scrambling over rocks but it was currently covered in ice.  The cliff must have been a waterfall during the recent thaw, the melt-water being directed by the cut of the trail.

John looked back.  The ground was covered by a light dusting of white.  The forecast called for three to six inches of light powdery snow.  Not a major storm and still hours away.  John decided to tackle the cliff.  He’d seen worse.

The wall proved easy giving him the confidence to continue.  The wind picked up, driving the snow sideward.

When John reached the little clearing he couldn’t decide if the sky was darkening because of the approaching storm or if early winter’s evening was upon him.  He didn’t dare risk taking a glove off to check the time on his phone.  His hands were already cold and the wind cut through him.

Being just shy of the summit he didn’t want to turn back.  It wasn’t like he was on Mt. Washington or even Mt. Monadnock.  In good weather he’d made this hike in an hour and a half, round trip.  It was minor.  Sure the snow was coming down pretty hard, but the ground was barely covered.  He’d seen worse.

The wind continued to whip, shutting visibility down to just a few feet.  John had made this hike a thousand times and wasn’t worried.  The wind-scoured trail was clear, though he did have to punch through some small drifts on the lee side of the bigger boulders.  The drifts and wind slowed him, but he trudged on.  He’d seen worse.

John could hardly stand up against the wind at the top so immediately turned around.  He’d made it but there was no reason to stay.  He banged his icicle like hands against his side before sticking them into his armpits.  He kept his eyes half shut as he descended and swore at himself for forgetting his facemask and neck gator.  He’d been out in colder weather, but the wind was painful, its icy blades cutting through his parka.

Terror shot through John as he half swam through a chest deep drift.  “This can’t be happening,” he muttered.  Calming himself down he realized his energy was needed to continue forward, not worrying.  He was experienced and knew how to be extra careful.  Panic and carelessness only got people in trouble, caused mistakes.  The heavy snow and darkness were earlier than he expected but he’d seen worse.

He came to the small cliff.  Snow had filled every crack and crevasse.  It was hard to tell where the rocks ended and the drifts began.  The trail was invisible.  Also ice covered, he reminded himself.

John picked his way carefully, testing every step.  Something suddenly gave way sending him tumbling.  He was stopped with a crunch by a large rock.  A sharp pain went through his whole right side.  He pushed himself away from the rock in fright and quickly stood up. He screamed in agony and fell back down, sliding to the foot of the cliff.

John lay panting, trying to forget the image of his crazily twisted leg.  He crawled to a nearby tree and pulled himself up.  He stood, all of his weight on the tree and left leg.  He looked down to the next tree.  It was doable.  He relaxed.  He could go tree to tree.  Sure, it would be slow, but it was the only way.  The wind wasn’t as strong down here.  Visibility was much better despite the dark.  He could do it.  He’d seen worse.

John swung himself forward.  His left leg shot out on an ice covered rock.  He tried to catch his fall with his right leg but nothing was there.  He continued down.

John lay stunned for a moment.  Slowly he tried to push himself into a standing position.  After an agonizing effort he gave up, slumping to the ground.  He had to rest, regain energy.

“This can’t be happening.  This is me, John, not some stranger in the paper.  I’ll just rest a moment.  It shouldn’t be hard.”

He lay motionless.  The pain and cold started to fade.  John smiled.  He must be getting stronger.  The snow drifted around the rocks, around John.  He didn’t notice, only repeated over and over, “I’ve seen worse.”