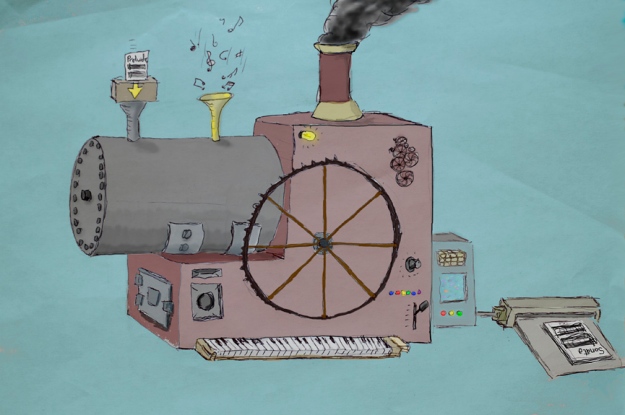 I was only a little way through my series of 24 preludes when I was forced to take a bit of an unintentional detour.  I had been posting each newly minted prelude to a music forum I was following at the time. When I posted my Prelude 6 in c# minor it quickly became a forum favorite.  Everyone suggested that I stretch it out into a longer form.  At first I resisted but I finally turned my 45 second prelude into a piece of music over six and a half minutes long.  I called it “Careful What You Wish For” and posted it back to the forum.

I have found that with many of the arts what works in a short/small format usually doesn’t translate well to something a bit larger/longer and vice-versa.  A gem of a story can become a bore of a book while a mess of a cluttered story might be turn into The Great American Novel.

This is true with music.  The ideas that are used to create a symphony can be a bit of a drag if used for something shorter while a theme used for a short piece might not have enough meat to support a symphony.

So I was nervous trying to use material created for prelude to make something larger.  But I decided to give it a try.  Once I got into it the music just developed on its own.

When I wrote the prelude I had just finished doing an in-depth study of the Romantic era of music.  So, as with any good prelude, I based it on an idea by Bach and fleshed it out with thoughts of Chopin but  a modern interpretation.

For the longer piece I decided to run with it and have fun.  The idea couldn’t go too far on its own so I made it the first theme of a sonata form composition.  Actually, I should say a “modified sonata form”.  Oh, there are so many details I’d like to bring out, but this is neither the time nor place.  Suffice it say I was pleased with the outcome.

So pleased, in fact that I decided to drop the name “Careful What You Wish For” after that one post and make it the first movement of a four movement sonata.  This sonata is still one of my favorite pieces I wrote.  As mentioned elsewhere, I use the third movement scherzo as my cell phone’s ring tone.

So, I think if you are careful it is possible to create a short form and a long form version of something using the same basic material.

What do you think?

15 thoughts on “Careful What You Wish For – Prelude to Sonata”