No dogs were allowed on the beach.  No dogs and no off road vehicles.   Why?  Because of the Piping Plovers.  I was lucky enough to meet the the whole family.

Here’s Dad.  He was the first one I saw.   He was walking from the water’s edge towards me.  I sat down and took a few pictures.

Then I noticed the babies. 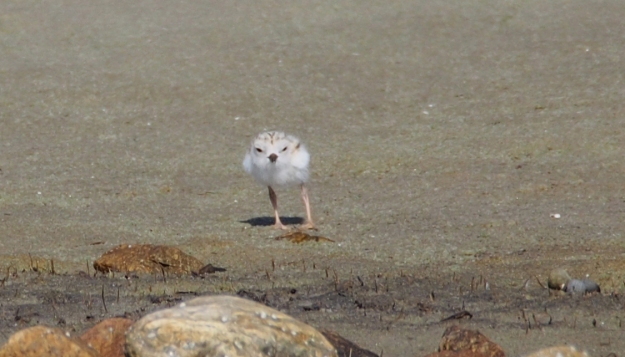 They were pretty far away, but I tried to get a few shots.

I wanted to get just a tad closer.  Not much, mind you, I just wanted a slightly better shot. 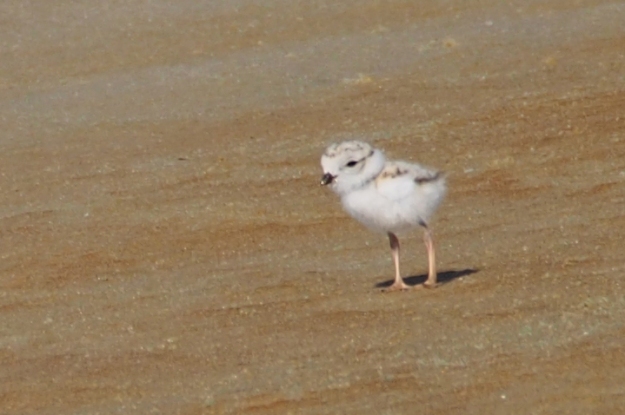 Mom Piping Plover didn’t think it was a good idea.   She flew and landed right in front of me as soon as I stood up and before could take a step.

Anytime I moved even the slightest she turned towards me and dared me to try to move any closer.  The flies were beginning to eat me alive.

I backtracked a few paces and started to head towards the water.  You see, the birds were between me and the car and I figured the only way around was to wade through the water around them.  After a step towards the water Mom flew and landed in front of me again.  (Actually, the picture above was taken after I moved and she followed me.)

I backtracked farther and moved toward the water again.  She kept her eye on me the whole time even though I tried to stay as far away as possible.  I guess I was good since she didn’t chase after me again.

Note – The pictures of the chicks are very heavily cropped.  Even with a telephoto lens they were just blips on the photo.  I was pretty far away.