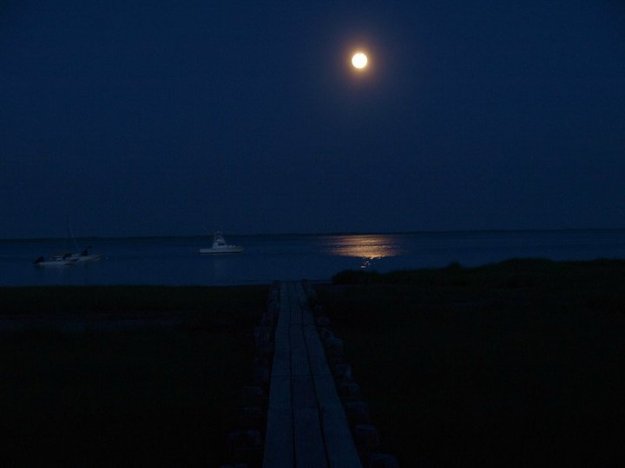 Selina could feel the throb of the Ocean pulsing through her long before she could actually make out the roar of the waves.  The beat of the earth’s salty heart made a rhythm with her own, a dance she alone shared with the mighty Sea.

But as she followed her thin shadow across the silvery landscape she realized that another heard his call.  For climbing up behind her, as she neared the westward ledge over the water, was her soul-sister, Moon.  She had a special relationship with Moon.  Sometimes, when no one was watching, Selina danced a slow, sinewy dance with sister Moon.  It was an old dance, a dance that came from her soul, a restless dance of subtle movements far removed from that earthy dance of the pulsating beat of Ocean.  For the flow and ebb of sister moon took weeks to complete, from absence to full and back to nothing again, always changing, always restless but always there.  The music of the Ocean, also restless, pulsed seconds between waves, hours between tides, creating a much quicker, Earthier, lewder dance.

On the cliff above the waves, Selina stood, raised her face to the sky, and spread her arms towards the Ocean.  Moon entered Selina and cast her beams across the satin surface of the mighty Sea.  She longed to feel the waves break across her body, the watery hands of Ocean caress her every pore, from head to toe.  She could feel the waves crash higher and higher as the tide water rose to meet the Moon, meet the Moon and Selina with her, one body, one being, pulling at the water as the water pulled at them, at her.

The Ocean called her name in the waves, “Oh Selina, my Soma.  I ache for you, my fair one, shining so bright up there so high.  Oh Mahina, my Diana, please come down so I can cover you with my wet caress, cover your body with my salty kisses.  Oh my Luna, sweet Moon, I call to you tonight.”

Selina felt him Earthbound, but reaching up as she soared through the sky.  They touched each other, filled each other, the rhythmic dance of ages, the pull of his sea foam tide, she embraced him with her light while he stroked her with the sound of his surging surf.  She felt the touch of his hands in the voice, the wetness of his being cover her body and she knew he could feel her as well, as they came together, merging in a different way than she did with sister Moon.

At the peak of their dance the Sea began to diminish, the tide began to recede, to pull away from the ledge where Selina once again found herself.  After one last silvery kiss, the Moon also left Selina, and took her restless sky path to find another sister on another shore, to once again pull together with Ocean in their mutual dance, the tide. The two great forces had left Selina, but she knew she wasn’t forgotten.

As Selina walked home, following the shadow across the quicksilver land, she could feel the Moon’s loving touch on her shoulders and the hear Ocean sing his sweet song to her with his mighty surf.

Oh, child of the moon
How you tug at the Ocean of my heart
And raise the tide of my blood
Can you hear me
Heavenly one on high
While I stay here
Bound to the Earth?
Do you feel my pull
As I do yours?
Do you need my watery embrace
As I need your evanescent form?
Make yourself real to me
So together we can raise the water
And share ourselves in the tidal dance

With Ocean tugging at her heart, jealous Moon sang a song in pearly tones in Selina’s ear

Stay with me, my love
Stay and dance with me
Bask in my silken light above
Let your spirit roam free
My Ocean sky
Is bigger than
The one below
My radiant face
Will set you
All aglow
Stay and dance with me
In your heart hold me true
Stay and be my lover
With me from full to new
For even when I fade away
I’ll always be with you
Forever in my eye
From my lofty view
Always know
I love you

And you, are you more like the Ocean or the Moon?  Or perhaps you are more attuned to Earth, Sun or Sky.  And if they called to you as they do to those willing to listen, who would you take to be your lover, who would be your friend?

Someone suggested that I write a love story about Ocean and Moon.  This is a little different for me.  I hope you enjoyed!

20 thoughts on “Songs of Ocean and Moon”