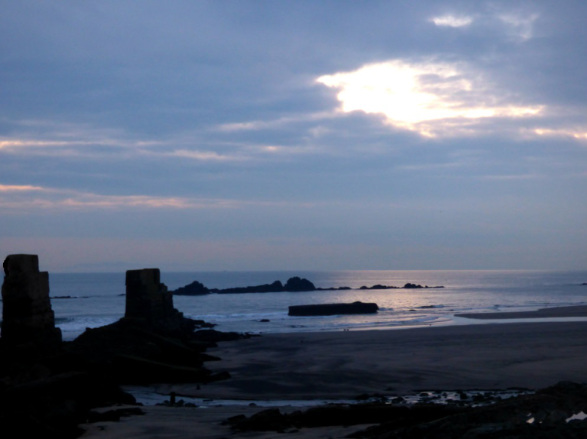 Samuel wasn’t at his chores again.  I always figured I knew where he was, but never tried to track him down.  It was a nice afternoon, so I decided that I could use some air and discover if I was correct.  Sure enough, I found him far from home watching out over the ocean.  This was so much further away than the Sound side of the island, but I could tell it was special to the boy.

I came up beside him.  “The sea is beautiful today, isn’t it?”

“Are you watching for anything in particular?”

“I’m waiting for a bug to crawl over the horizon.”

He smiled.  “That’s what it looks like.  First there’s a dot.  It hangs there, sometimes appearing to float in the air over the water.  It skims along, slowly growing.  Then it resolves itself.  Before long I can tell if it’s a local fishing boat or perhaps a merchant ship heading up the coast from New York.  But sometimes it’s a whaler, and my heart sings.  Often it will head towards New Bedford, or go to round the Cape towards Salem.  But sometimes it does come towards us, heading for Town.”

He continued to scan the empty Ocean, his eyes glowing.

“You know, Samuel, that it’s a shorter walk to the Sound side and you could watch the ships come into the harbor.  You’d catch them all, and not just the handful that you can make out from this beach.  Or you go into town and see them in the harbor.”

He nodded.  I waiting, watching him.  After a few minutes, I decided he wasn’t going explain without some more prompting.

“If you are waiting for your father’s ship, I would say watching them come into port from the break-wall would be the quickest and easiest way to know when he’s home from his long journey.”

“So why are you so interested in this beach?”

He didn’t take his eye off of the sea.  “Can’t you feel the pull?  I don’t want Father to be home, I want to be with Father.  As soon as I’m old enough, I’m going to go there.”  He pointed out to sea.  “There, over the horizon.  I can hear it calling my name in the gentle murmurs and the storm lashed waves.  And I will follow, to the horizon and beyond.”

I watched Samuel, his eyes glowing as he looked out over the Ocean, and nodded.  I knew he wasn’t much longer for living under my roof.  That was the day that I knew I had lost my son to the call of sea.