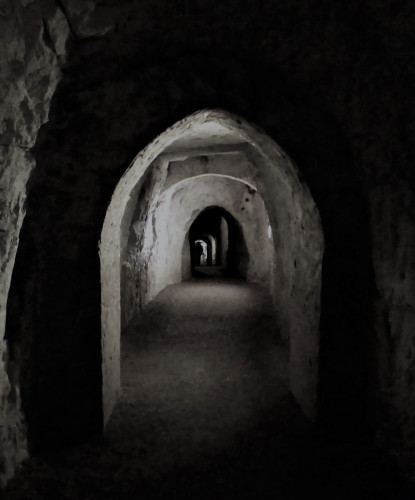 Note – this is the sixth exciting episode of The Mad Quest!  You can start at the beginning, go to the previous chapter or to the table of contents.

I took three steps forward and opened my arms wide.  I was hoping that with the dragon’s attention squarely on me that the other two would be able to escape.

“Take me and spare the others,” I said.  I closed my eyes and waited for the end.

After a what seemed like eternity of waiting, I risked opening one of my eyes just a little.

“Why did you close your eyes, human?” the dragon asked.

I dropped my arms and opened my eyes all of the way.

“It’s just not something I want to see, my death coming and all.”

The dragon narrowed its eyes.  It moved it’s head in closer.  I vowed that I wouldn’t close my eyes this time and waited for it to strike.  It turned its head slightly and looked at me closely with one of its eyes before drawing back.

“I don’t understand humans,” the dragon said.  “Your ‘brave’ prince ran the minute he saw me, even though I was more than a mile away and headed in a different direction.  Seeing him run made me give chase and I ate all of his men.  Now you, a self professed coward, was willing to give up your life to help your friends.  Intriguing.  Oh well, I guess maybe I’ll just eat you now and contemplate the strangeness of the human race later.”

“Ma’am, if you’d please,” Merla said.  Both the dragon and I turned to her.  Who was she calling Ma’am?  “We are on a quest and were wondering if you could help us.  Can you spare a few minutes?”

“Exactly what type of help were you looking for?” the dragon asked.

“Well, first, if you don’t eat any of us and instead let me talk to you, woman to woman, that would be a great help.”

The dragon released another fireball above her head along with a giant rumble.  “I’m sure it would, puny one.  And what would you want to talk about?”

“You took a sword from King Brinwald, snatched it right out of his hands without hurting him or any of his people.  You then hid it from us.  Zurlfed is now threatening us again, and only the sword can save our people.  Can we, uhm, you know, can we have the sword back?”

“I knew it!” the dragon said.  Another huge flame ball rose above its head, followed by another booming rumble.  “I saw you traipsing across the desert and thought to myself, ‘Self, I bet those humans are going to try to kill you for the sword.’  And I was right!”

“No, of course not,” Merla said.  “Why would we want to do something as stupid as that?  As far as I can tell, there are too few dragons in this world.  Why, I heard of a male dragon living alone, not able to find a mate.  Poor thing.  You are too far apart.  There are too few, too few indeed.”  Merla bowed her head and shook it.

“Wait a second.  Back up.  Did you say you know where a male dragon lives?”  Merla nodded.  “I think, perhaps, that we can make a deal.”

“I don’t care anything about any stupid sword.  Why should I?  One of my claws is worth 100,000 of the best magic swords ever made.  No, swords mean nothing to me.  I separated all of the swords out of the other treasure I’ve found and tossed them into a storage room.  I’m sure I put that battered bit of metal Zurlfed asked me to steal from your King Brinwald in that same room.  I can let you go into that room and take any sword you find.  I do this as a friend, from one woman to another.”

“No need to repay me.  I am lonely, I’ll admit it, and like to talk.  This has been nice, though of course there is nobody like another dragon for real conversation.  I don’t think I’ve seen another of my kind in well over a thousand years.  Thinking of that, if you, by chance, hear of a dragon and let me know where it is, well, you know….”

Merla smiled.  “Of course, if I hear of any, I’ll let you know.  I think I know of one, but perhaps having the sword will help me figure it out…  And I do want to chat with you some more, in a personal, one on one fashion.  Do you mind?”

It is strange to say, and I can’t put my finger on exactly what it was, but the dragon looked pleased.  “Of course!  Follow me.  All of you, come this way.”

We followed the dragon over a rise.  On the other side there was an ancient castle, larger and older than anything I could imagine.  It was so old that it seemed more of an ancient growth than a man-made object.  Perhaps a primeval tree that petrified over the ages.  We entered a door, the dragon magically elongating and narrowed to fit in such a passage, and continued down an outer hall.

“You,” the dragon said, indicating Silriend and myself, “stay here.  It is time for a nice girlie chat.  I can’t tell you how long it’s been since I’ve had real conversation!”

The dragon and Merla followed a side passage and were soon lost from sight and sound.

Silriend and I sat down and waited.

We chatted for a while to bide the time, but soon grew bored.  There was from the lack of a common frame of reference, for one, but mostly it was just plain nervousness.  Both of us jumped at the slightest sound.

There were many sounds, most slight, but occasionally there was a loud booming sound from deep inside the fossilized castle. The first few times we jumped up, but later we figured out that it was the dragon laughing.

I started to sink into sleep, but was wakened by a sound.

There was another boom, but louder, closer.  A few seconds later the two ladies came back into view.

“Oh, there they are now,” Merla said to the dragon.  She tried to hide a laugh, but a few escaped anyway.  The dragon puffed up, turned and let out a booming laugh.  The tunnel lit up.

Silriend and I glanced at each other, then back at the ladies.

“Glindilla is the funniest creature on Earth, I swear,” Merla said.  She wiped the tears from her eyes.  “I can’t remember the last time I had such fulfilling girl talk…”

“What about the sword?” I asked.

“Oh, that.”  Merla laughed again, but quickly brought herself under control.  “I went into the sword room.  I narrowed it down to three swords.  They are all ancient and magic, but I wasn’t sure, so…” she shrugged, “…here they are.”

She handed Silriend a short jeweled scabbard, then me a longer, plain leather one, and she kept the even longer, richer scabbard for herself.  She found them, so I was OK with it.  I strapped the sword on and began to pull it out.

“No, stop,” Merla said.  “That might be a bit dangerous right here and now.  In fact, it is possible that any of the swords would do any of us more harm than good.  All three are powerful.”

The dragon led us outside.  We followed it back to the little cottage we had used.

“You can spend the night here again and eat your fill,” the dragon said.  “In the morning take what food you will and leave my lands.  You will find your path.  You are all very brave, and so luck will be with you.  Luck of the dragons.  Merla, thank you for the conversation. It has been centuries, perhaps millennia, since I have been around such pleasant company.”

The dragon turned to go.

The dragon stopped.  Merla walked over to it and whispered in the place that I guessed was an ear.

The dragon smiled.  “Thank you, Merla.  You really didn’t have to tell me, but thank you.”

The dragon turned and was gone.

Merla turned to us.  “I told her where to find the male dragon.  I hope he is still there.  The last report was from my grandmother’s time.”

It was already dark, so we entered the cottage for our supper and bed.  I knew we’d have a long day in front of us.