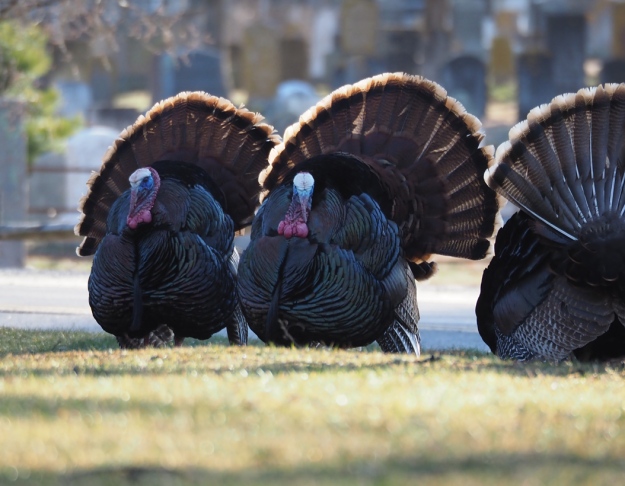 The last couple of times I visited cape Cod I took quite a few photos.  I decided to divide them out into four posts:

Osprey
Hawks and Eagles
Ducks, Geese and Swan
Turkey and Other Birds
Water and Such

This post is about Turkey but with a couple of others thrown in.

A week ago I put up a joke post about space aliens.  Of course the punch line was that they were wild turkey.  Look at those Blue Meany faces!

Back on March 31 I was driving through Dennis village towards Chapin Beach.  I had to stop because a large flock of turkey came out of the cemetery and crossed the road in front of me to a little park.  There was very little traffic and the other cars seemed to be annoyed at the turkey, but I thought it was cool.  I stopped and took some photos.

Usually I see a lot of shore birds on Chapin Beach.  I didn’t see as many these times, so I didn’t get any good photos.  But I did get several photos of Great Egrets.  This one was at Bells Neck.  Look closely at the ground near his feet.  I’ll have more about it on my next post.

There are about a half a dozen species of woodpecker (or closely related) on Cape Cod and back up in New Hampshire (Red-bellied, Downey, Hairy, Pileated, Red Headed (I’ve only seen in NH) and Northern Flicker).  I see them all of the time but almost never get a photo of them.  I have never taken photos of a Red-bellied.  Until now.  The funny thing is that there are a couple of Northern Flickers at this same spot (I got some awful photos of them), and when I first saw the birds,that’s what I though they were.  But then I saw that red head..,

I usually get a lot more photos of different birds than this, but I decided to separate this out so I could put more turkey photos up ;)

Here are more photos. Click on them to see more detail. Once you click on one, you can scroll through them.