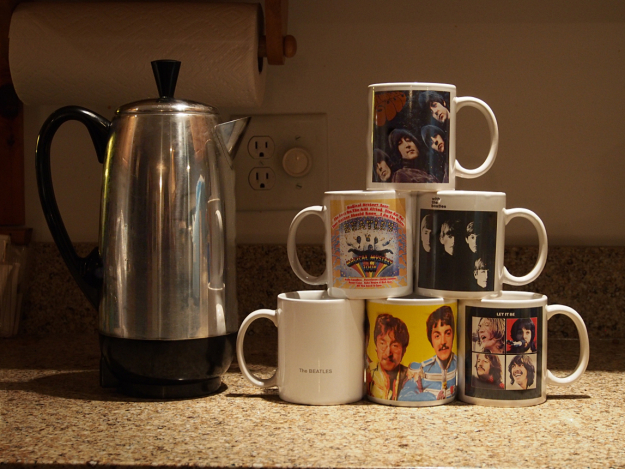 Hello and Welcome!  Come on in and I’ll get you a nice large mug of a very strong Sumatra Roast.  I can also get you a cuppa tea or other beverage if you would prefer.  We can go out back and sit.  The early morning sun is gone, but it is still very comfortable out there.  And where are we?  Some of you may recognize the stack of Beatles mugs as being at the cottage on Cape Cod.

This was a pretty good week.  Work is back to normal.  The emergencies from a few weeks ago are over and I have caught up from my vacation.  Still busy, but it always is.

The weather was odd, and not what it was supposed to be.  A big part of it was the left overs of Gordon changed the forecast drastically, making the weather last weekend into early this week change from sunny and pleasant to damp and cool.  Actually, it was down right cold for a couple of days.

I did a bit of work at both the New Hampshire house and down on Cape Cod.  One thing I did was put dirt around my NH house.  Yep, you read that right.  Despite the rain, I went out and dug up several wheelbarrows full of nice black dirt from my mulch pile and packed it around a corner of my house.  I need about three times as much as I put on, maybe five times as much, but it was a good start.  Eventually I’d like to get it so the lawn slopes away from the house again, instead of towards it.  I also need to get about half way up the top foundation stone so the large spaces between them and the next row aren’t exposed to the elements any more.When it is -20F and there is a 60 mph wind, it is nice to not have a bunch of screen doors open into the crawl space….

As usual, I drove down here late Wednesday.  I worked Thursday and Friday, but was able to walk in the woods Friday.  This morning i took a long walk on the beach.  I waded in the water, which is still warm and saw a bunch of seals.  Thinking of a bunch of animals, a flock of turkey was hanging out around my house yesterday.  I got a few photos with my good camera and phone after they had moved to the front yard (see below for phone photo).  After a while they moved on.

I’m a little over a week into my return to blogging.  I am getting back into the swing of things, but it is still not as natural as it was.  My stats are obviously loving it ;)  Going from single digit days to one day over 100 views.

Well, that’s about it.  It looks like it will be a nice day and so I need to get moving.  Thanks for stopping by!

I hope you have a great week!  If you have a coffee share, I’ll try to stop by, but no guarantees – I still not in a blogging mood.

The original Coffee Share kind of died out, but it has been revived!  Eclectic Alli is hosting a coffee share.  This week’s share is here. and the link up is here. Come on and join in!  Hopefully we can bring it back to its former glory!