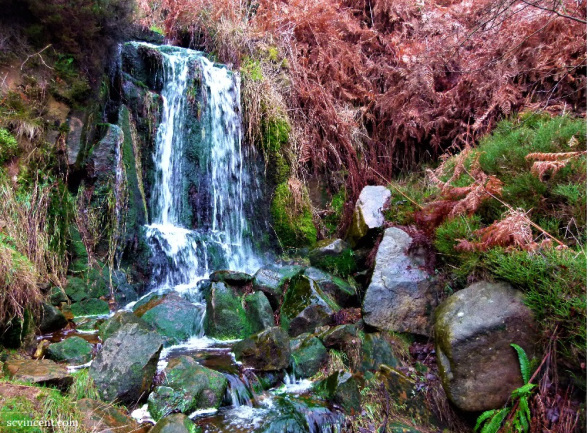 “No.  Nope.  No.  No.  No, no, no.  Uhmmm, no.”  The man had arched one eyebrow and then the other.  He twisted them both up as he pushed the drawing farther away and then scrunched them down as he drew it closer.  The eyebrows were giant and bushy.  Ed watched them in fascination as they danced around the old man’s face.

“No.  This is not around here and never was.”

“Are you sure?” Ed asked.  He took out another sheet of paper and pointed at a spot.  “It should be right here.”

The man twisted his face, one huge eyebrow going up onto his forehead while the other smashed into his cheek.

“Fascinating.  Where did you get this?”

“My great uncle made it.”

“I take it that your great uncle’s name was Jackson Pollock.”  Both eyebrows went up in a large, bushy arch.

“Exactly.  What.  My guess is nothing.  Abstract Expressionism at its best.”  The historian looked pleased with himself, his grin curled up almost to the great bush of fur over each eye.

“This is a map of this region.”

“And just when was this map or yours created by Uncle Jackson?”

The man took out an over large phone or a small tablet.  His thumbs moved like a 17 year old’s thumbs, not a 77 year old.  He studied the paper as he played with the screen, then stopped.  The eyebrows made a neat line just above his eyes as he set the tablet down next to the drawing.  He adjusted it a little.

“This is a map of the area.  See this line here?  It matches your map.  This spot you said was here?  Right, it is, if you look at the real map.”

“But most is so different.  I thought you told me that this place hasn’t changed much in centuries.”

“It hasn’t.  You say your map was made in 1954, but I think 954 might be closer.  See this?”  he pointed to spot on the map on his tablet.  “This village has been here time out of mind.  And here has been a church in that location, right here, since at least the early eleventh century. Perhaps it was there even earlier.  Maybe your map is closer to 654.”

“Or perhaps the map maker only drew what was important to him,” Ed pointed out.

“There is always that possibility.”  We squinted, bringing his brows into a strange, hairy pucker.  “But a very small one.”

He studied the two maps for a moment.

“There,” he said, pointing to the tablet’s map.  “This is where you said the building is.”

Ed studied both maps.  “Yes, I believe that is correct.”

“It is a lovely autumn day.  You should take a walk.  You do like walking in the autumn, don’t you?”

“Fall?  Thinking of that, if you start here,” he pointed at a place by a road, “you will walk by a lovely little fall.  It is special this time of year.  Anyway, you should get along so you can return before dark.”

Ed thanked the old historian and took his leave.  He started driving on the wrong side of the road, before, with a thought of the hairy curve of an eyebrow, he pushed his car to the left just before a vehicle appeared around the curve.

“What a strange place.  It’s like God was on acid or something.”

Ed felt silly, since he said the words aloud.  He glanced over his shoulder to make sure nobody was around.  He looked back at the small falls.  He scowled, thinking of how the historian’s eyebrows would look.

“Blue and orange.  Aren’t those opposites?  Pink and green aren’t that similar either, are they?”

It was a smallish stream and only dropped about four feet.  He wondered if this is what the historian meant as the “lovely little fall”.

After getting over the bright colors of the moss and vegetation, Ed did think it was nice if not spectacular.  The water was bluer than expected, which was interesting.  Yes, rather nice.

Nice or not, he knew he had to move on.  But which way?  The trail came to an end at the little fall.  The spot he was looking for was just beyond.

Was that the trail on the other side of the stream?

Ed step across and climbed a small moss covered boulder.

“Scrambling over rocks at my age,” he said.  “Got to be careful or I’ll fall and…”

He lay there for a moment, half stunned.

“…break my neck.”  He finished the sentence he had started.

He sat up and took a deep breath.  There was a bit of pain in his chest.  His arm also hurt.

“Brain case seems solid,” he said.  “Perhaps the yolk was bit shaken, though.”

He started to stand, but sat back down again.

“Not so sure about the legs, though.”

He decided to sit for a little while, recuperate a little, and then test the legs again.  A stray thought wondered how often the falls was visited, but he quickly chased the negative thing out.  No sense worrying.

He carefully brushed his hands down each leg in turn, testing, pressing.  Some spots were a bit tender, but nothing felt out of place.

He stretched his legs out.  At least they didn’t go off at random angles.

He leaned back and closed his eyes.  .

“Have a little fall, did you?” a strange voice asked.  “My, what a start to your adventure, right?”

Ed’s eyes snapped open, but nobody was around.

He decided it was just his imagination.

But then he heard the laugh.  The world went dark.

This was written for Sue Vincent’s #writephoto challenge.  See this week’s challenge here.

As is the Table of Contents.