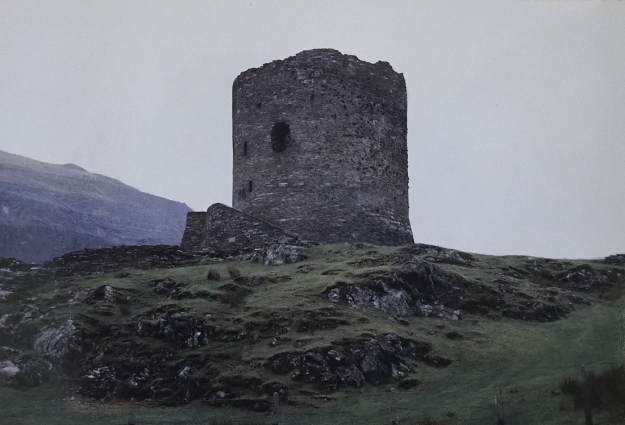 Note – this is now Chapter 17 of the story Of Wind and Wings, a story inspired by Sue Vincent’s prompts.

Note 2 – this chapter is not based on one of Sue’s prompts.  It is an “in between” chapter that was needed to fill in detail.

It was the infinite rows of columns dream again.  Ed had figured it out, hadn’t he?  Why was it returning?  He walked directly towards the light, but the light grew less bright and warmer as he drew closer, become less like daylight and more like the light of a candle or oil lamp.

Where the waystone should have been, a bed was in its place.  A very familiar bed.

He was in the bedroom at Liza’s house, standing just inside of the doorway.  The room was softly illuminated in a warm glow.

In the lamplight he could see a man on the bed.  With a shock, he realized that the man was him.

He was in bed.

He turned towards where he thought he should have been standing.  A woman was there.

No, not Liza.  She was familiar, but Ed wasn’t sure if he’d ever seen her.

“Hush Liza, my darling girl.  It was just a bad dream.  Go back to sleep.”

The woman approached the bed, approached Ed.  She was looking down at him, but he knew that she didn’t see him.

“Shhh, my dear.  I know.  But don’t worry.  You are destined for great things!  You just have to decide what they are and go out and find them.  You can be anything you want, make your own destiny.  There may be signs along the way to help, but you need to do it yourself.  And you can!  Nobody else will create that destiny but you, yourself.”

She was standing over the bed, holding an old lamp.  She looked a lot like Liza, but different.

“You will find your destiny.  I met my destiny once, you know.  I did.  But I passed it by and won’t try to chase it down again.  It is in the past, except that part that is here.”  Ed thought her smile was sweet, but sad.   “That destiny may not have been all that it was cracked up to be.  All I got from that encounter with destiny was a beautiful daughter.”  She giggled.  “I just wished that the beautiful daughter would sleep and forget bad dreams.  I wish she would stop asking impossibly questions about the man she will someday meet and marry.  He will be nicer than the nightmare, I promise, even if he doesn’t live up to the dream.”

The woman began to sing.  It was a language both strange and familiar.  Irish?  Welsh?  Scottish?  Gaelic?  Ed didn’t know, but he felt at home in the sounds and rhythms even though he didn’t know the words.

But then the words came to him, but in pictures.

It was an empty moor covered in mist.  An ancient kingdom had once thrived there, but all signs of it had vanished with age.  A man, a prince of a vanished people, rose from the mist.  A romantic hero for the ages, and a dream man for the young girl, Liza.  Grey eyes with lightning bolts.  A strong arm but gentle hand.  Promises.  A haunting melody for a haunted place.  The shadow prince rides back into myth with his true love.

Song complete, the woman watched over the bed with a tender smile, then bent in as if to kiss the unseen child, whom Ed knew had fallen asleep with the song in her ears.

The room was dark and empty.  No lamp.  No woman.  No song of myth and fantasy.

Although the apparition wasn’t frightening in the least, Ed shivered briefly.  Moors and ghosts, ghosts and moors.  Why did these words go together so well?

“Perhaps I really am a modern Heathcliff stuck in a silly Gothic novel,” Ed mumbled to himself.

He still didn’t remember the book, but he seemed to recall that Heathcliff was haunted by a ghost.  But wasn’t the ghost his true love?  Liza’s mother wasn’t his true love.  No, not even remotely.  He had never even met her!  Nor, he felt, was Elisabeth Smyth herself.  He just didn’t feel it.

Ed thought of his ex-wife, Martha, he still loved her, but was she really the love of his life?  He searched his heart.  No, not really.  There was always something held in reserve.  Ed had always felt it, but only then, lying in that bed, did he realize that problem was that Margret couldn’t love him back the way he wanted to be loved.  He remembered the way she had acted when with Stacy.  The whole “lesbian thing” wasn’t something to get a rise out of people, it was who she was.  It took another woman to release her true self.  She did love Ed, in her way, but it was far from a romantic love.  He had always known that, deep down inside.  He had always known.  No, Margret wasn’t his true love either.

Who would fill that position if he were in such a novel?    Who was his true love?

In the back of his mind he heard a voice from his dreams singing in an unknown language.  It grew louder clearer.  He still didn’t understand it, but he felt it.  He felt it deep inside.  He could almost make it out.  Just a few more seconds.

But then the voice went silent.

Where was Lauren?  Was she sulking in the city, held captive by a more sophisticated place, just like Catherine?  How could he reach her?

He called out in a language he didn’t know.  He put all of his mind to it, this calling out.  Was there a response?  Was that a voice, just on the verge of hearing?

With Lauren’s voice in his head, he fell into a deep sleep.

Yuck.  Someday I am going to create a proper navigation for this story…

2 thoughts on “Dreams and Ghosts”