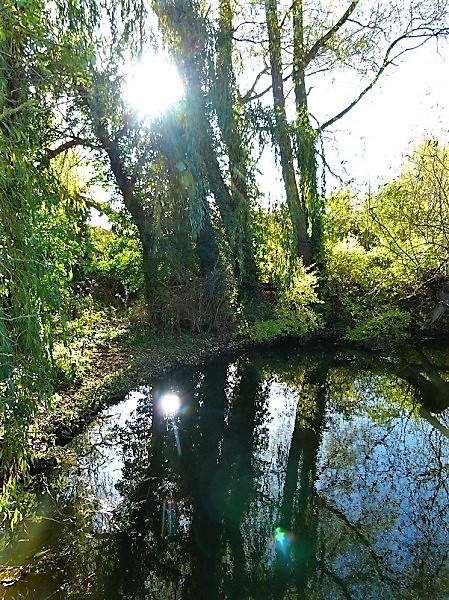 “Which is the real world, the one in front of me or the one reflected in the mirror of the pool?”

Dan laughed at his bit of silliness.

It had all been getting to him, work, family, everything.  Reality.  His reality.  He needed some time alone, far from his work and family, far from his reality.  Time to be alone with himself.  What is more important than self?  It wasn’t a hard decision: he took a long weekend to unwind in the woods. It would be perfect.

But it wasn’t going as well as planned.  Despite being away from it all, so far all he had done is worry, worry and more worry. The real world just wouldn’t leave him in peace.  He would see a flower and think of bills unpaid, work not finished, arguments unresolved.

He walked on, his reality in his head screaming at him so he was unable to see the reality of the woods around him.  It just wasn’t fair! He was special and the world wasn’t fair, that’s all it was.  He fumed, the stress getting worse instead of better as he stewed on his situation.

And then he found the small pool.  It was an almost perfect circle about 20 feet in diameter.  There were no obvious streams into it or out of it.  The surrounding forest was perfectly reflected on the smooth surface.

The strangeness of the pool, the watery mirror, had released some of the pressure.  For a moment his mind was someplace else besides work or bills.

And yet, it wasn’t peace that replaced the stress of real life, it was just a different type of pressure, one that he acknowledged only by making stupid, nervous jokes.

Still, the pool, the mirror, did pull at Dan.  The sky and woods were perfectly reflected there.  What would he see when he was reflected there as well?  Would he see that stress of life?  Could he leave some of it there, floating in the water with his reflection?

He walked to the water’s edge and looked down.

His face looked back at him. Or was it his face?  It looked like him, but there was a glow making the reflection more beautiful than he imagined the reality.

Or was he really that beautiful?  Part of him thought he was.  he must be, right?

Dan laughed again, but it was a nervous laugh.

“Perhaps the only one who is real is Narcissus.”

Dan regretted the words almost instantly. They sounded wrong.  It was OK, to like yourself, wasn’t it?  To love yourself?

He looked back at the reflection and frowned.  No worry lines, no stress marks.  Good.  These last few months hadn’t gotten the better of him.

He studied the reflection even more closely, seeing every pore, every last hair and line. getting lost in the reality of the image before him.  The reflection smiled up at him.  Was he smiling?  He didn’t think so.  The smile grew large, showing the teeth.

The teeth were sharp.

The sun had moved.

How long had he been there?

The reflection still had the strange, toothy smile.

After a minute he slowed down to catch his breath.  He half laughed at himself.  Why had his own reflection scared him?  It was just plain silly.  There was nothing there, just a pool of still water reflecting the world, the real world.  The other world was just a reflection, a shadow, a mirror of reality but not real in and of itself.

A clearing opened up before him.

It was the mirror pool again.

Unable to help himself, he walked to the edge and looked down.

Dan turned, a scream stuck in his throat.

He looked at the reflection.  It was just him.  Well, not him.  He was reality.  It was a reflection of him, a surface copy.  Nothing to be frightened of.  It was fine.

Dan thought about it.

He must have circled back in his panic.  This time he wouldn’t make that mistake.

Noticing the location of the pool and the sun, he began to walk, ensuring the sun was always in the same spot.  He wouldn’t walk in circles this time.

It wasn’t long before he began to relax.  Yes, he still watched the position of the sun, but that nervousness had left him.  It was just a reflection in a pool.  Only his panic had made his reflection seem sinister.  It was a mirror copy, not real.  he felt better.

Dan stopped.  Was there a noise behind him?   Something in the bushes?  He couldn’t hear anything, so continued on, but more cautiously.

He heard it again.  Something was following.

He quickened his pace.

It was catching up, getting closer.

He began to run.

The noise was loud.  It was right on top of him.

The cold water of the mirror pool ended his scream.

His essence pulled to the surface of the pool, Dan watched the old, previous refection walk to the water’s edge, walk to the edge from the outside, from the “real side” of the mirror.  The refection smiled and gave Dan a half salute, which he was forced to mimic. The reflection laughed, a long belly laugh.  Dan silently mimicked it without a feeling of mirth.  With a wink, which Dan copied, the reflection turned.

As the reflection walked away, Dan could feel himself dissolve back into the water.

He knew he was stuck forever.

The sky turned a soft orange.

Perhaps if another person came and looked into the mirror of the pool, he could find a way to switch places.

He thought about it as the sun set.

Dan began to scheme.  He would find a way out.  That reality that lie just beyond the surface.  He’d find a way to break through.  He had to find a way.  He would.

Reality slipped, but the cycle of the days and the seasons and the years continued to cross the mirror of Dan’s pool as he waited for the next self-absorbed victim to come and look into that mirror.