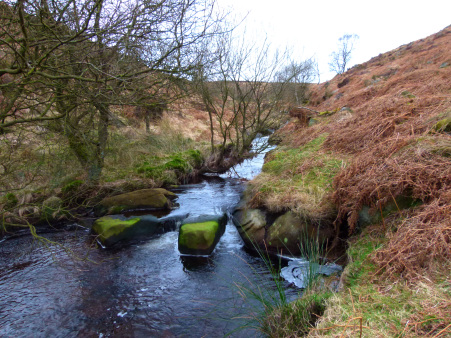 Jegd stared at the pool without seeing it.  The sound of water, always present, did not enter his consciousness.

It was an impossible choice.

He could go against all that was good and join their leader, Krewn, on his mission.  He could refuse and loose rank, possessions, friends and possibly more, but keep his dignity.  A third choice was no less palatable – he could leave his village and strike out for unknown country, a coward turning tail and fleeing.

“The water in the pool is calm, but look at the falls that helped to build it.”

The age-bent man seemed not to notice Jegd, but continued to talk, pointing with a staff.

“The water rushing over the rocks carved out this place of tranquility.  But imagine being a drop of water approaching.  All you would see are the rocks!  Then you may realize that the waterway splits into three.  The center path appears straight, but from closer in you notice the sharp flints that tear at all that passes that way.  To the left the water crashes against a large rock in a spray.  To the right it drops out of sight over a fall, the destination unknown.  If you were a drop of water, which would you chose?”

Jegd squinted at the old man.  “Which one?”

“Yes, which one, the easy way out that will cut your insides to ribbons, the difficult path that will bash you against the rocks or the mysterious path into the unknown?”

Jegd followed each path, imaging he was a drop of water.  But then a thought struck him.

“But all three paths lead to the same place.” He waved his hand to indicate the pool.

Jegd thought for a minute.  ‘So it doesn’t matter which path I take, the outcome is the same?”

“Yes.  Any path you take eventually leads to the deep tranquility of death.”

Jegd laughed.  “Well, that really cheered me up!”

The old man frowned at the water.  “It wasn’t meant to cheer you up, it was meant to teach a lesson.”

Jegd nodded.  “I get it.  In the long run, it doesn’t really matter, because death is the end of every trail.”

“Not exactly.”  The old man pointed to the stream. “Does it make any difference to the pool which path any particular water drop takes to get down to its level?”

The old man looked at him for the first time.  “I’ll answer for you, “No”.  You are but a drop of water and in the big scheme, anything you do is meaningless.”

It was right, yet didn’t make sense to Jegd.  He shook his head.

“But if all of the water took one of the paths, it would change that course and recarve the pool below.”

“Maybe, but remember two things.  First, you are a drop, not all drops.  Can you make all drops follow you?  Second, it is impossible for all of the water to follow one path, even if they wanted, unless the streambed before the choice was changed.”

Jegd looked back at the point just before the rocks, and then at the old man.  “Three choices?”

Jegd followed all three in his mind one more time.  The easy path full of splinters, the difficult path with its torturous course and the leap into the unknown.

He turned back to the old man, but discovered that he was alone.

That evening, the entire village turned out to hear Jegd’s answer.  He stood in front of their chief, Krewn, and spoke to the crowd.

“Our leader has asked for me to do evil.” A few of the older men laughed.  Others were obviously uncomfortable.  “You say that I must join him in this evil and be praised for my skills or to refuse and be condemned as a coward.”

“I will now give Krewn my direct answer.”

Jegd turned and thrust his dagger into the chief’s heart.

Many years later, an emissary of a great and distant king asked Jegd the secret of his long and peaceful rule.

Jegd smiled at the man.  The youngest child in his lands knew the answer.

“You are not a mindless drop of water following the flow.” He crossed his arms, end of discussion.

The emissary frowned.  “I don’t understand.”

“No path is set in stone and no choice predetermined.”

And so he had lived his life.

This was written for Sue Vincent’s Writephoto Challenge.  The beautiful photo at the top was taken by Sue and provided for the challenge along with the word “Choice”.

For some reason this story did not come easy.  I also brought it to an abrupt end to fit it within 750 words.  But I can’t think of a better way to end it…  Anyway, I hope you enjoyed it :)