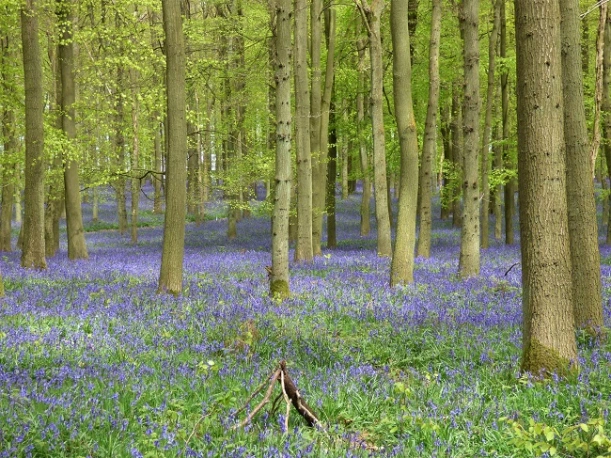 A purple haze gave the forest a magical quality, something unearthly that Mike couldn’t quite put his finger on.  With a Jimi Hendrix song playing through his brain, he realized that the haze was really a carpet of flowers.  Bluebells.

One of them rang out.

Mike startled awake.  Early morning light streamed through the window, making his mind jump to a fictional Lauds, with the hidden bells of make-believe monastery calling all to prayer.

It was the tolling of the coughs.

Mike’s neighbor, Brad, was out front with his dog, Mitzie.  Brad didn’t look so good.

Mike pulled some clothes on, getting ready to go out to check on him, when Brad coughed again.  A peek out of the window showed the neighbor doubled over in a bit of a fit, hacking away.

“It tolls for thee.”  A shiver went down Mike’s spine.

No, he didn’t want to get sick.

Brad straightened and headed towards his house, despite the fact that his dog was trying to pull the other way.

Mike closed his eyes.  The forest full of bluebells instantly came up in his mind.  Although each flower was individual, they made a whole, a carpet, a sea.  A continent. A high hill rose at the end of the forest, a hill crowned by a manor.  Not a manor, but Brad’s house.  He watched, horror struck as the house tumbled off of its promontory into the rising sea of purple.

Mike grabbed jacket, mask and gloves and rushed out of the door.

“Hey Brad,” he called out as his neighbor was about to enter his house.  “Hold up.  I’ll take Mitzie for a quick walk now, but I want to check up on you when I get back.  OK?”

As he walked with the dog, the words of John Donne rang forth in his mind.

No man is an island,
Entire of itself;
Every man is a piece of the continent,
A part of the main.
If a clod be washed away by the sea,
Europe is the less,
As well as if a promontory were:
As well as if a manor of thy friend’s
Or of thine own were.
Any man’s death diminishes me,
Because I am involved in mankind.
And therefore never send to know for whom the bell tolls;
It tolls for thee.

For whatever reason, as soon as I read the word “Bells” in the prompt, those famous words came to mind.  Of course, as soon as I saw the photo, the words “purple haze” and their associated song came to mind ;)

This was written for Sue Vincent’s writephoto challenge.  The lovely photo at the top is Sue’s.  The key word this week was “Bells“.