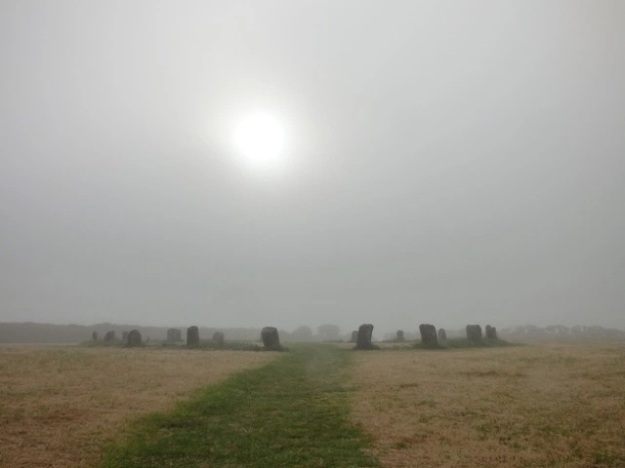 Ed was sure that he was awake, that he had gone out exploring on his own, but the world was unearthly, much more like his dreams.

He thought about the journey that he had been on each night, through the pillars and then trees, down to the sea.  Where was he going?  And was he following a similar path while walking in the sunshine?

Not that there was much sunshine.

The feeble home-star was attempting to cut through the thick fog in vain, hanging like a ghost in the sky.  The world had been erased in grey, except for green path forward.

“It isn’t possible,” Ed mumbled to himself.  “I know I’m awake, or at least I think I am, yet this is so like my nightly journey.”

He shrugged and followed the greenway forward.

As he walked, he could hear that woman’s voice again, singing it’s song both as fresh and catchy as the latest McCartney tune and as complex and difficult as anything Schoenberg could dream up. The voice was growing louder, so he must be going in the right direction.

Then, if not following the green path, which way would he go?

Slowly as he made his way forward, he realized that there was a large ring of stone, seen mostly as shadowy pillars rising out of the fog.

He thought of all of the pillars in his dreams, but this was different.

And, unlike the dreams, he saw movement.

As he drew even closer, he realized that a woman was dancing.  Her fluid movements matched the rising and falling of her song.

Was this really her? He had never seen her, just heard the voice.

Not that he was seeing her now, just the dancing shadow in the middle of the ring.

The greenway went right through the middle of the ring, but Ed stopped at the edge, transfixed by the graceful beauty of song and dance, even if it was just a shadow play.

A voice, a male voice, whispered in his ear, “You are seeing our side, don’t you know?”

He turned and the world changed.  Shifted.

It was as if he was suddenly a half an inch to his left and for a very tiny fraction of a second almost saw himself that half of an inch over, but then, there was nothing, but everything.

Ed was standing at the edge of a stone circle.  It wasn’t huge, yet it was complete, with many upright pillars of rock.  The sun was shining brightly.  No longer covered in mist, it was no longer mysterious, just an ancient monument from a people long gone.

He walked around the stones for a while before heading back.  Strangely enough, he could not find the green path to follow, so he used his somewhat limited sense of direction.

After dinner, Ed asked Liza about the circle.

“Ah, you must have found the Fairies Dance.”

Ed, feeling a little foolish, shook his head, no.

“Well, look it up.  Anyway, local legend has it that the fairies did a magical dance and so moved the stones through the thin air from a great distance to the present location.  It seems that their music was so powerful, that the stones themselves wanted to dance.  When the music stopped, the stones stayed.  Or so they say.”  She shrugged.

“Why haven’t I heard of this place?  I would have thought every tourist to England would want to see it.”

“Well, it isn’t so easy to find, you know?  Local legend also says that it can only be found if it wants to be found.  So, consider yourself lucky.”

After dinner, Ed spent a few hours going through his great uncle’s notes.  Sure enough, there were many references to the stones.  Strangely enough, his uncle said that they were best viewed from the world of the hobs.

As Ed fell asleep, he had a half dream that he was watching the woman dance again.  This time he walked up to her.  She stopped dancing, but continued to sing, her back towards him.  He so wanted to see her face.  He tapped her shoulder.  She began to turn.

“I’m sorry, I just found some photos of the Fairy Dance I wanted to show you.  They can wait until the morning.  Good night.”

Ed stared at the ceiling for a while before drifting back to sleep with the strange melody in his ear.

This was written for Sue Vincent’s writephoto challenge.  The photo at the top is hers and she gave us the key word “Dance”.

I wrote this as a side chapter to my larger work, Of Wind and Wings.  If I do fit it in, it would be close to the end.