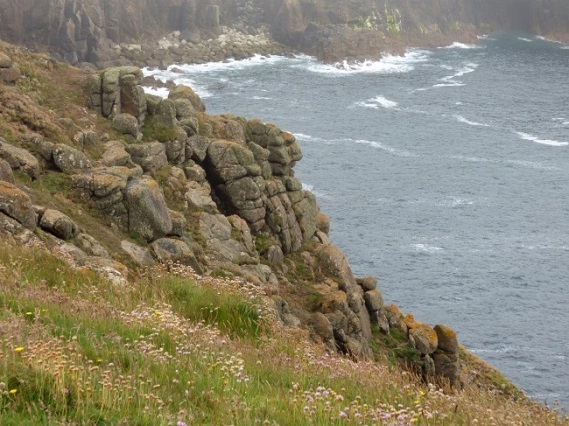 Stan stopped the little procession at the observation point. From here the sea could be seen stretching to the horizon, but it was the cliffs that caught his attention.

A few faces of rock stared with menace at the sea, the Guardians.  He set off towards those faces, towards the cliffs, without saying a word.

Most would stay at the observation point.  Only two guards followed, two guards and her.

Her presence, a warm welcoming feel, like a fire on a cold night, made Stan frown as he picked his way through the flowers across the steep, path.

Why couldn’t she stay here, a flower amongst other flowers?

He had been caught off guard by her beauty, and drawn by her glow.  He had felt his stomach knot up as he listened to her quick wit and understood her deep intelligence.

“Why?!”  he couldn’t help the outburst.  She had just smiled at him.

Stan stopped again, just above the faces he saw from the observation point.  There was a shear drop of over 200 feet to the rocks and water below.

He turned to the other three.

“Why?” he asked in a whisper.  It wasn’t art of the ceremony, he just needed to know.

She smiled again.  “You will never understand.”

Fighting back the tears, he read the lines, said the words and asked the Guardians below for a sign.

At the end he motioned to the guards to continue.

The picked up the young woman and heaved her off of the cliff to the rocks and waves below.

Back at the observation point, The Reys nodded in approval and led the procession back to town.

Stan didn’t follow the others, but stayed and watched those stony faces.

It was said that the Guardians protected the island from all outsiders.  They would dash any ship against the rocks and ensure none set foot on the sacred land.

He shook his head, still feeling the loss.

Why has she made contact?  And worse, why had she read from a forbidden book that was smuggled to the island?

He still had her book, along with the other contraband collected over the years.  It sat, unused, unread.

At least until now.

He started toward the village.  The Reys would tell him that he had done right, that the island was safe, but Stan, the Guardian, wasn’t so sure.

She was, of course wrong.

He was beginning to understand.

Written for Sue Vincent’s writephoto challenge.  Sue provided the photo at the top, as well as the word “Guardian“.

10 thoughts on “The Guardian #writephoto”