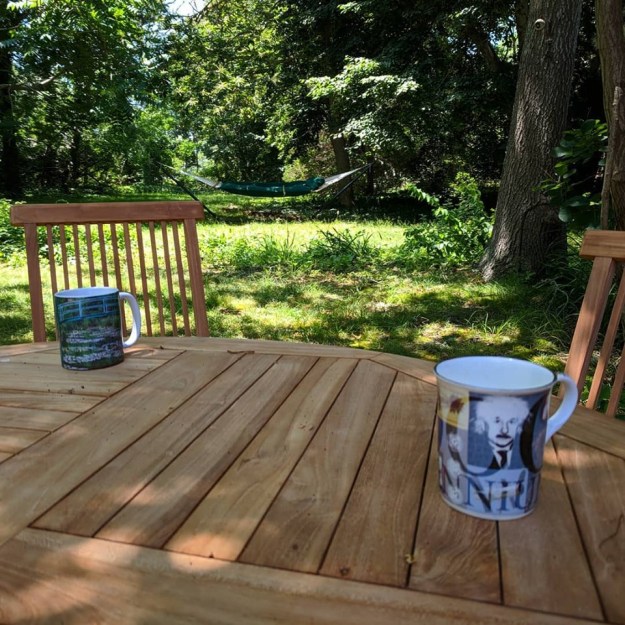 Hello and Welcome!  Come on over and sit down!  Actually, it is pretty wet out, but there is a sheltered area – it’s like a wall-less room off of the side of the back barn just to the right of the photo at the top.  I think the rain has stopped and it will be a nice day.  Where are we?  Some may recognize that photo as being from Cape Cod.

I’m not sure what to talk about this week.  The same=old, same-old, of course – work, walking the dogs, exercise, etc.  Weather – after being so hot, the temperatures crashed, but they have come back up to normal now.  Lack of hair cuts – I tell people I am going after the Franz Liszt look… (google it ;) )  I haven’t been blogging much the last few days.

Then there is the wider world.  Yeah.  Perhaps I will do a longer post on that later.  It is very complex, but people simplify it so much. Sigh.  OK, real quick:

Anyone who doesn’t think racism is one of the biggest issues facing our country has their head in the sand.  I don’t understand why people storming a statehouse with assault weapons because they want haircuts are heroes while people peacefully protesting for racial justice are treated as enemies of the state, but about a third of my “friends” on FaceBook feel that way and state it in very, very strong, occasionally ultra-violent (i.e., they want the army to kill all of the protesters), terms. I do not condone violence and/or looting and will make no excuses for it, but the people who commit these crimes are a small minority of the protesters, just as the “bad cops” are a minority of all police.  I have loved seeing the police in some cities joining with the protesters. I have hated that some politicians have used whats going on to divide our already divided country more.  I have hated reading foreign news and seeing what the world thinks of us.  I have loved seeing older white people standing hand in hand with younger people of color, including my over-80-year-old parents.

I am never political on my blog, but this is important.  On the other hand, is it political?  It shouldn’t be!  Look at this statement by George W Bush.  See?  It is not a left/right issue, it is a human rights issue, and this conservative ex-president also believes that it is a human issue. Thank you, George.

So, yeah, that is where my head was this week ;)

As the weather today improves, and it has since I began writing this, I will spend more time outside.  I mowed a bit yesterday and need to finish when it is drier.  I also need to clean up around here – it is so easy to just come down here and relax that cleaning goes by the way-side.