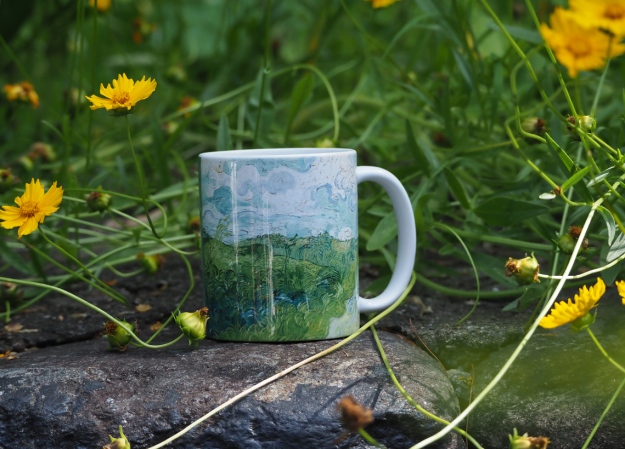 Hello and Welcome!  Let’s sit down here at the table on the patio and I’ll get you a nice super strong mug of dark roast, a cuppa tea or other beverage.  It is still a little cool, though comfortable, but I can get you something cool instead of warm, if you’d like.  We can sit here and look off into the woods and pretend we are a million miles from anyone instead of in the middle of a village.  And were is this village?  Some may recognize that van Gogh mug as being in New Hampshire.

This was a busy week.  I had a busier than usual work week.  Partially because of this, I didn’t blog as much as usual. I also had a dentist appointment on Thursday – I had a filling :( There was the typical playing with dogs in the woods behind the house and walking.  For some reason, they preferred playing this week and we didn’t walk as much as usual.  I ran and did my strength exercises.  I read.  Typical stuff.

Still an odd week in the outer world.

To say that I have been thinking a lot during this strangest of years would be an understatement.  I can’t go into any detail – at this point I can’t summarize in less than 100K words – but know that I am a humanist. And by that, I don’t mean “anti-religion”, I mean that the individual humans are more important than the things that humans have made, that every human deserves rights and dignity, that we are not here to be a part of a huge machine that benefits someone at the top of the pyramid.  And part of this is to hold everyone accountable, not just those at the bottom, but, in particular, those at the top whose actions are much farther reaching who can damage far more lives.  Because, remember, it is those lives, each and every one, that is important*.  These are the things I’ve been thinking about, but much, much more…

Anyway, enough about that.  It is a beautiful day and I need to go celebrate it.

Thanks for stopping by.  If you have a coffee share, I’ll will try to make it over, but, as always, I can’t make promises.

* note – When I said “it is those lives, each and every one, that is important”, that was not meant as part of the “all lives matter” thing.  I understand that if you say, “My house is burning down!”, for me to answer, “Yes, all houses matter,” is hateful. Yes, all lives do matter, but right now the “houses” of the black lives are “burning” and we need to solve that before we can move to the blanket statement.  Black Lives Matter.